IN THIS MODULE YOU WILL FIND

SCROLL DOWN AND HAVE FUN!

Form 2 groups who each stand at their hoop (equal distance away from the cotton balls in the 3rd hoop). They have to use their toes to pick up as many cotton balls and bring them back to their hoop while hopping.

Variations: Pick up the balls with chopsticks for ninja-theme. Could also be a relay race.

What is needed? A speaker

Children dance/bear walk/hop etc. to the music. When the music stops you call out 2 or 3 body parts & they have to put that body part somewhere in studio you call out.

STUCK IN THE MUD

What is needed? A speaker

They have to bear walk around the room without getting tipped. Once a child gets tipped, they have to freeze in downward dog until they have been ‘freed’ by another player who has to crawl underneath them.

Tippers can change with each round, sample with the activity & freeze pose.

What is needed? Feathers

Each child gets a feather, hold the feather in the air as you look up & blow it into the air as high as you can.

– Try to catch it

– Try to reach the ceiling

What is needed? Cotton Balls

Each child gets a cotton ball & all children lie behind a rope/line. At the same time they blow the cotton ball as far away as they can.

What is needed? 1 balloon per child

Each child gets a balloon that they have to hit in the air using the body part you call out, without letting it touch the floor (e.g. hand, foot, head, elbow, shoulder, nose, knee etc)

1 person stands out the front & yells out a colour. The first person to touch the person out the front wins & becomes the new traffic light. Red = stop, Green = go, Yellow = slow

BALL GAMES: split the group into 2 or 3 teams & get them to stand in a straight line behind one another to play a team ball game.

– Over under; side to side; tunnel ball;

TEAM TUNNEL: split the group into 2 or 3 teams & get them to stand in a straight line behind one another while they are all in the same pose. One at a time the person from the front has to crawl through the tunnel and join the chain at the back, continue until all children have had a turn.

RELAY RACES: split the group into 2 or 3 teams & get them to stand in a straight line behind one another at one side of the room. One at a time the person from the front has to go to the other side of the room and back completing a skill before the next person goes, continue until all children have had a turn.

This is a good game to play in a busy class. Can make 2 or 3 teams if the group is big.

What is needed? Parachute & small balls

– Run into the middle while holding parachute high (mushroom)

– Make a cubby house while sitting underneath on the edge of the parachute.

– Put small balls on top & shake them around

– Washing Machine: half of the kids sit on the parachute, in the middle and the other kids make them spin. Swap groups

Stand up in a circle and hold hands. Place one hoop on a child’s arm and pass it to the next person without releasing their hands.

Variation: do it on the beam

Create a circuit using blocks, bolsters, hoops, beam, etc and ask kids to work with a partner. One of them will be blindfolded and  the partner will guide them trough the obstacles. Then swap.

Can talk about cooperation and respect before starting.

OUTDOORS: CAN USE PLAYGROUND AT THE PARK

The kids all spread out & do their handstands according to the teachers instructions. Each round can be different winner:

You can also change the type of handstand: 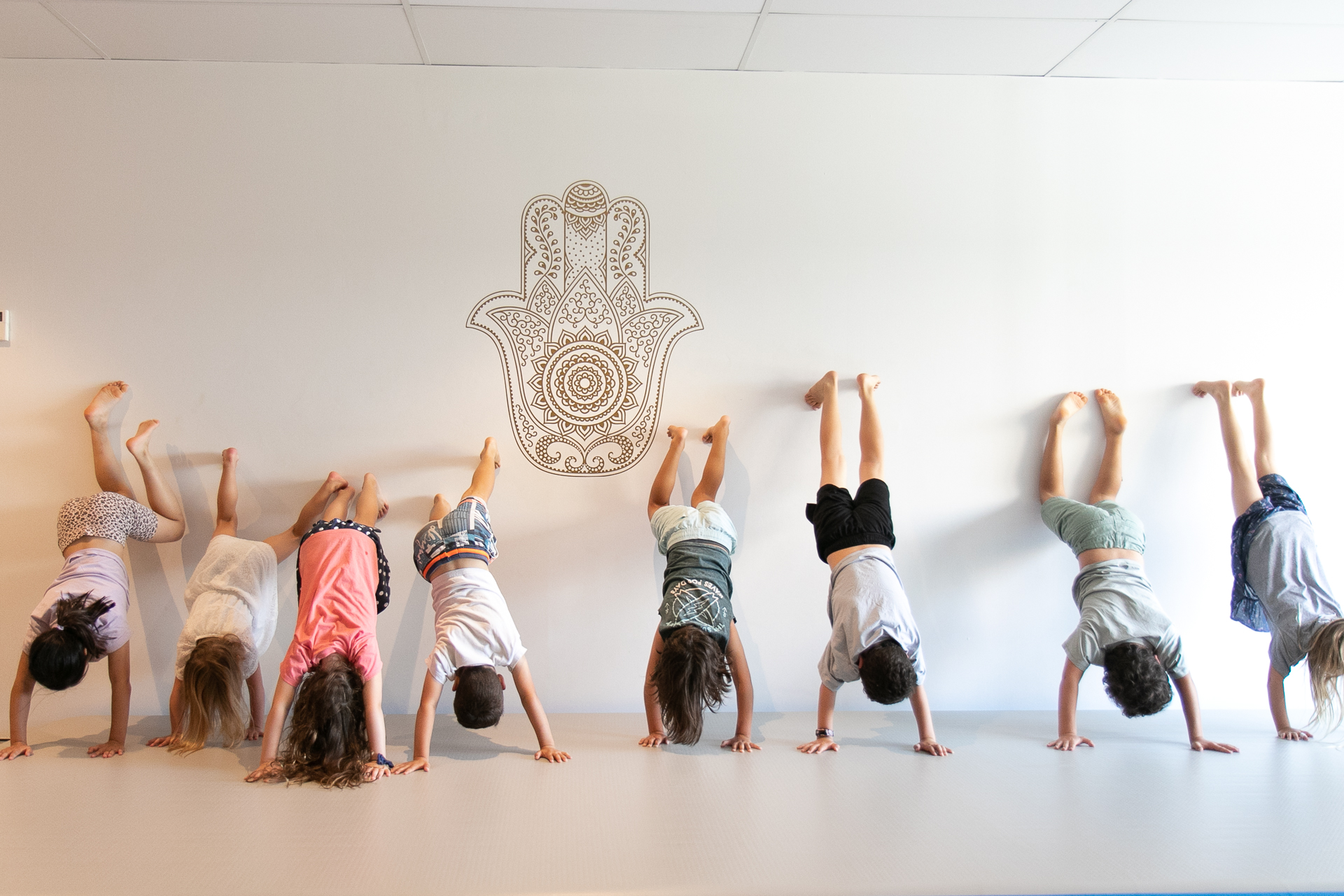 NIGHT AT THE MUSEUM

All kids sit in a circle and one go to a side room while the teacher picks the murderer. The guesser comes back to the main room and stands in the middle of the circle trying to find out who is the murderer that will be “killing” people looking and winking them.

All kids sit in a circle and one goes to a side room while the teacher picks the pattern leader. The guesser come back to the main room and stands in the middle of the circle trying to find out who is the leader that will be doing different patterns with hands/face and all kids copying him/her.

INDIVIDUAL COUNT: each child has to lie down with their eyes closed like a meditation and count to 60. Meanwhile you use a timer to count to 60. When they think the time is up they sit/stand and see the time. Winner gets the closest to 60 seconds on the timer.

GROUP COUNT: sit/lie around the room with faces to the ground. One at a time the group has to count as high as they can (1, 2, 4, 5 …) without speaking over one another. (Rules: children cant say 2 numbers in a row).

– Try to hula hoop as long as you can 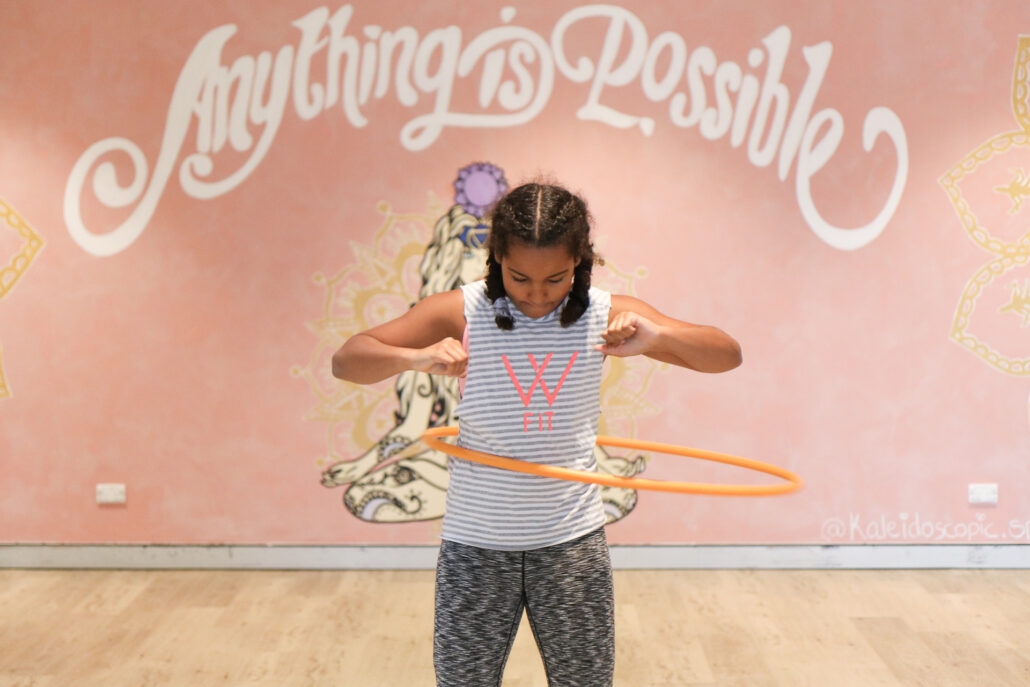 – Try to skip as long as you can

– Try to skip & run around the room

– Try to criss-cross or spin the rope backwards

– Try to double spin the rope while jumping

– Try to skip with the long yellow rope, try to run in/ out

– Jumping forwards & backwards with bean bags in between ankles

– Tuck jumps with bean bag in between knees

– Bunny hops with bean bag in between knees

Try to teach a bunch of acro poses in pairs or groups. 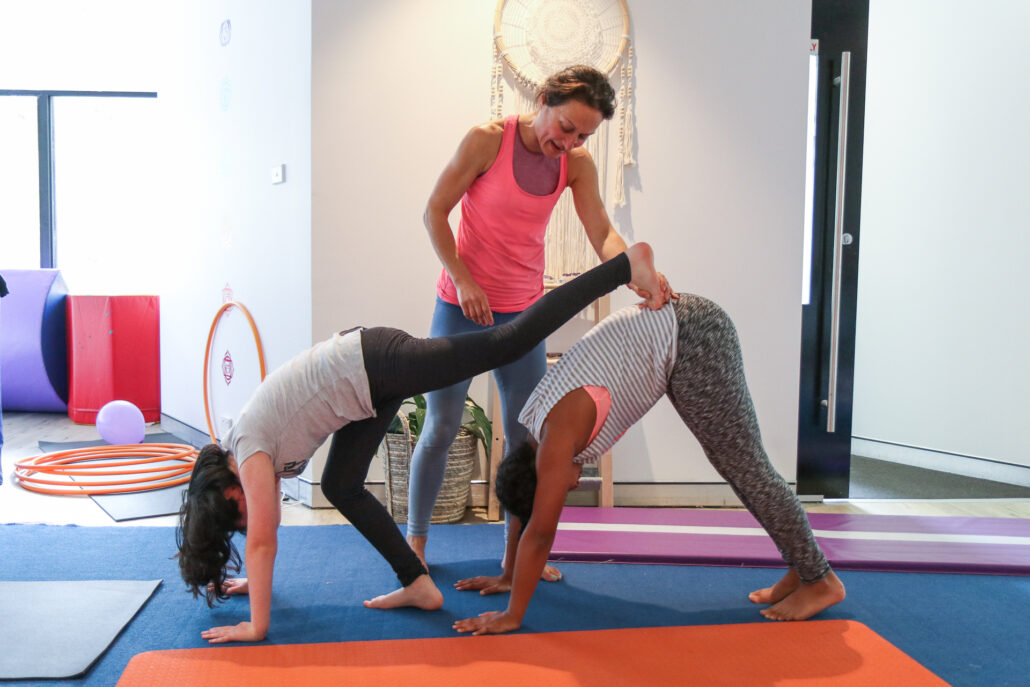